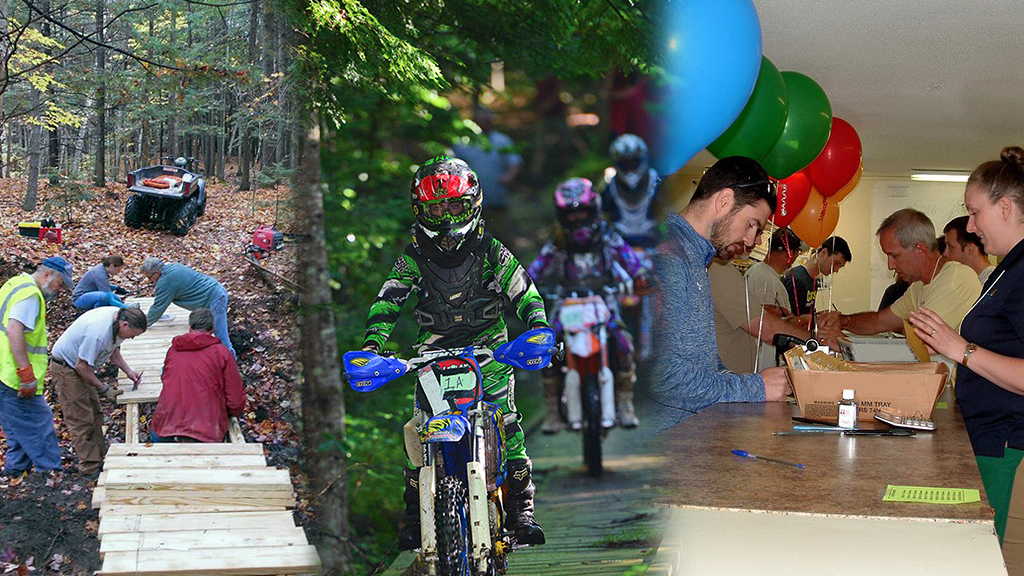 MVTR was formed by individuals who realized a need to unify the growing sport of off-road motorcycling, “trail riding”.

As formal weekly rides brought riders together, a more structured monthly ride developed into published recreational events enjoyed by others from surrounding states. “Connie’s Ride’ from Litchfield, NH, a Club favorite, made way for “The Jack Noga Memorial Trail Ride” hosted from the NH International Speedway in Loudon, NH. It is now “The New England Classic Charity Trail Ride” benefiting the Cystic Fibrosis Foundation of Northern New England. The event has raised in excess of $2 Million dollars over its life time.

Trail rides for the competitive of heart were begun and gained fame as the “Cockermouth Enduro” in Hebron, NH to what is now the “Rock Crusher Scramble” in Weare, NH.

MVTR was instrumental in drafting legislation which allows the use of legalized trail bikes on public ways in the State. The use of these public ways makes for rides covering many miles of New Hampshire countryside, versus the confines of a sand pit or other enclosed areas.

MVTR led the drive to open the Hopkinton-Everett Flood Control Zone as the first State designated wheeled OHRV riding area in 1976. Since that time MVTR has partnered with the State Bureau of Trails to maintain the riding area as an OHRV multi-use recreation area.

MVTR stands for stewardship of land and trails

MVTR is made up primarily of trail bike enthusiasts; men, women and children. Though a two wheeled group at heart, it recognizes and supports other wheeled vehicles and OHRV users sharing the trails and adventures. Many members cross train on mountain bikes and others enjoy winter trails on snowmobilies.

Throughout the spectrum of trail riding, recreation, competition, legislation and public relations.

MVTR stands for the safe and responsible enjoyment of the sport.

MVTR is dedicated to the safe and responsible enjoyment of the sport.